An Open vs Closed System Struggle: The Fight for Continental Water Management in Quebec 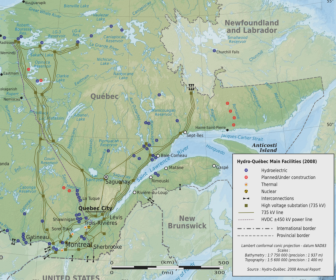 While minister of Hydraulic Resources under the leadership of l’Union Nationale Premier Maurice Duplessis(1945-1959), Daniel Johnson championed large scale water and hydroelectric projects, making Quebec into the premier pioneer of hydroelectric engineering in the world.

Prior to Maurice Duplessis, Québec’s break with cultural backwardness that had plagued its population for so long, had been initiated most boldly with Premier Adélard Godbout (1939-1944) and his creation of Hydro Quebec via the nationalization of Montreal Light, Heat and Power Company. Godbout’s collaborator Louis Philippe Pigeon was inspired by Roosevelt’s Tennessee Valley Authority, and began bold programs that unleashed cheap electricity, advanced agricultural technologies and rural electrification, breaking the usurious private stranglehold of Montreal Light, Heat and Power which had been prohibiting development and squeezing the population dry with expensive and unreliable electricity for decades.

By 1959, approximately half of Canada`s hydroelectric power was coming from Quebec, and a culture of progress was finally beginning to blossom through the aid of the unique `Classical education` system whose design was to create morally developed citizens fluent in classical literature, as well as Greek and Latin.

After Duplessis` untimely death in 1959, the next wave of cleansing of radically regressive elements inside of the Quebec establishment occurred during the “100 day revolution“ of Paul Sauvé, Duplessis’ successor. Under Premier Sauvé and Daniel Johnson (then Minister of Water Resources), the trans-Canada highway was constructed through Quebec, and an array of social reforms were implemented leading to increased funding to classical colleges and increased minimum wages. Johnson was also given carte blanche to use Quebec-based engineers instead of Duplessis’ intention to use only American firms to construct Quebec’s energy and water development projects.

As Minister of Water Resources, Daniel Johnson would lead in the initiation of several ambitious hydroelectric programs during the last years of the 1950s which would include the Manicouagan 1, 2, 3 and 5 as well as three sites at the Outardes River with the 2600 Megawatt (MW) Manicouagan 5, or “Manic 5” dam as the largest of the set. The Dams would impound the world’s fifth largest asteroid impact crater creating the fifth largest reservoir in the world. The total electricity development of these projects would be over 7500MW! The real wealth however, would be located not in the increased electricity, monetary profits or even productivity of the society, but rather in the intellectual and cultural revolution that would transform a submissive society into proud citizens due to their increased mastery of nature. The former boundary conditions that had held Quebec back in a closed system and a logic of scarcity, were being quickly eliminated to the horror of the British Empire.

After untimely heart attacks killed both Maurice Duplessis in 1959 and his successor Paul Sauvé four months later, the Union Nationale fizzled out and was replaced by the “new reformers” of the Liberal Party of Jean Lesage and a clique of authors largely run out of the University of Laval, of a program later called “The Quiet Revolution”. This program was led by René Lévesque who became Minister of Natural Resources, a disciple of Father George Henri Lévesque named Maurice Lamontagne, and a young Rhodes Scholar named Paul Gérin-Lajoie. These characters had spearheaded the establishment of the first Ministry of Education, cleansing the educational system of all traces of classical-humanism. While Lévesque went on to form the Parti Québécois (PQ) 16 days after Johnson’s death, Maurice Lamontagne became an influential Senator and Chair of the Commission which purged Canadian science policy in 1970 bringing in the Organization for Economic Cooperation and Development’s (OECD’s) Systems Analysis. This strategy was being led at the time by Alexander King, then science director of the OECD, and later co-founder of the Malthusian Club of Rome, whose Canadian branch included Maurice Lamontagne as a founding member. In 1970, Gérin-Lajoie would head up the Canadian International Development Agency (CIDA) created by Maurice Strong two years earlier. This agency would be devoted to a neo-Malthusian reconquest of former colonies hungry for independence during the Cold War as a money injecting mechanism designed to sink poor nations into debt slavery and IMF-dominance.

Gérin-Lajoie employed his fellow Rhodes Scholar Jean Beetz to direct the Institute for Research into Public Law (IRPL) at the Université Laval in 1961, providing Fabian Society asset Pierre Trudeau with his first teaching position after having been blacklisted by Duplessis for years. This institute also brought Trudeau’s inner circle collaborators Marc Lalonde and Michael Pitfield in on the Board of Directors. All of these “new reformers” were united in having come to prominence writing for the influential anti-Duplessis magazine Cité Libre, begun by Trudeau in 1950.

At this time Pitfield and Lalonde were busily working as assistants to Federal Minister of Justice Davie Fulton whose assignment was to sabotage the design of W.A.C. Bennett’s “Two Rivers” development policy in British Columbia (1). Fulton was also a Rhodes Scholar and was allied with another “new nationalist” named General Andrew McNaughton, then Canadian head of the International Joint Commission (IJC) charged with overseeing transboundary water issues with the United States. Their chosen method of proposing water projects on the West Coast that would cut off the Americans and direct water to Canadians only, would be attempted in the East Coast as well as we shall soon see. The fear of “continentalism” driven by technological progress and joint development of resources amongst Canada and the USA was the greatest motivator of the British Empire at this time.

While many elements intent on bringing in “scientific” (aka: system’s analysis) methods of management in political and educational planning were introduced with these Liberals, positive elements such as Adélard Godbout’s old ally Louis-Philippe Pigeon was brought in to help plan for Quebec’s development as well. Daniel Johnson’s friend Pierre Laporte also became a leader within the “new reformers” and went on to be assassinated by the RCMP controlled FLQ terrorist cells in October 1970. Some of these elements, including Jean Lesage himself, would became influenced by the aggressive diplomacy of Charles de Gaulle who intended for Quebec to take on a key role in his international “Grand Design”.

Johnson’s plans for the Manicouagan and Outardes dams were almost thwarted early on due to the intervention by Lord Edmund Leopold de Rothschild who commissioned a study to exploit the 5428 MW hydro potential of Labrador’s Churchill Falls as an alternative to moving ahead with the Johnson design. General McNaughton became an avid champion of the Rothschild project and had it gone through then no culture of Quebec engineering or development would have occurred as it did, and a greater degree of separation of Canada from the USA would have been effected.

Through the influence of Johnson’s allies in the Liberal Party, as well as Charles de Gaulle’s advice, Lesage was swayed to break with the Rothschild policy and moved ahead with the Johnson plan employing Quebec engineers. By 1965 Lesage became even more uncooperative with the British-run `New Reformers` when he rejected his former adherence to the `Fulton-Favreau` formula for constitutional reform then being pushed by Gérin-Lajoie and the IRPL. A $100 million loan provided by B.C.’s Premier W.A.C. Bennett who was busy fighting a similar battle on the West Coast was also used to help Jean Lesage access highly needed capital to begin construction of the Manicouagan and Outardes dams.

The intention to keep society stuck within frameworks of fixed parameters, both materially and intellectually, has been the driver of this past cycle of history that began with the deaths of Paul Sauvé, and John F. Kennedy. The fact that mankind`s relationship with the biosphere is not fixed, but rather dynamic has been a troublesome reality which those self-proclaimed `gods` and their lackeys would try desperately to conceal.

The sole metric of value worth anything must be founded on the fact that the biosphere`s evolution is the effect of an anti entropic directionality underlying the fabric of the universe, and when humanity abides by its own anti-entropic potential by making ever more advanced discoveries into the universe, those parameters defining his limits melt away and ever greater states of freedom are opened to his potential sphere of activity. By disregarding this fact, the British Empire, and all empires necessarily force themselves into the conclusion, as Aeschylus`s Zeus had done, that depopulation and the management of diminishing resources is the unfortunate basis upon which its continued existence must be maintained.

Let us learn from the lesson of Charles de Gaulle, Paul Sauvé and Daniel Johnson by throwing off the shackles of Zeus and return to a spirit of progress before the path towards a new dark age becomes one from which we can no longer return.

(1) Premier Bennett fought for almost 7 years to ensure that his plans to develop the Peace River in northern BC would not be sabotaged by either Mcnaughton or Fulton who tried various schemes to ensure that Canada was not brought into closer proximity with America to the north or the south. For more, see `W.A.C Bennett: vs the Malthusians`, by this author in The Canadian Patriot #4, Jan 2013