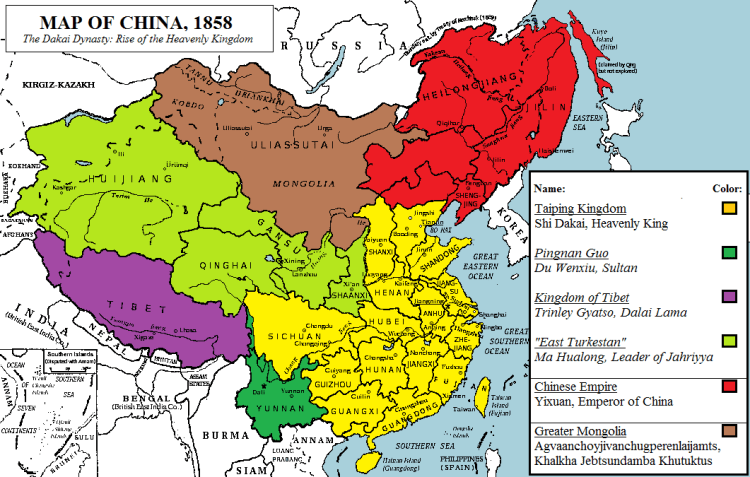 Opium, Synthetic Cults and the Haunting of the Taiping Heavenly Kingdom

In part one, we were introduced to China’s surveillance state and broader social credit system and asked: Is this type of undemocratic behaviour justified in the modern world?

If the west were truly a beacon of liberty and if nation states were the only forces negotiating global policy between each other acting out of a concern for their citizens’ well being, and national interests then certainly the answer would be a loud negative.

However, when one accepts the reality of a supranational power structure operating above nation states committed to a specific dystopic formula for a world order, then the picture changes a bit.

In order to maintain the perception that China is a villain in the minds of credulous consumers of most conservative media, it is asserted that China is an atheistic monstrosity committed to crushing religion. If one wishes to practice religion in China, we are told the consequences are jail, draconian social credit scores or even the loss of one’s life.

Although popular, this perception is entirely bogus.

As far as freedom of religion is concerned, China is a land which is home to over 50 million Christians and has over 65,000 churches of protestant and catholic denominations. Muslims make up the majority of the population in Xinjiang which hosts over 24,000 Mosques which is a far greater per capita number than anything found in the USA. Buddhist and Daoist temples abound across China as well. For a refutation of the Uyghur genocide myth, click here.

While China is a secular state, it has come a long way from the anti-religious outlook dominant during the dark days of the 1966-1976 Cultural Revolution. Even China’s constitution protects freedom of religion (article 36), with the simple caveat that “No state organ, social organization or individual shall coerce citizens to believe in or not to believe in any religion, nor shall they discriminate against citizens who believe in or do not believe in any religion. The state shall protect normal religious activities. No one shall use religion to engage in activities that disrupt public order, impair the health of citizens or interfere with the state’s education system.” And most importantly: “Religious groups and religious affairs shall not be subject to control by foreign forces.”

So basically, freedom of worship is constitutionally protected as long as your religious group doesn’t have the smell of color revolution on it.

Despite the fact that it is required that Churches, Mosques, and Buddhist temples receive a government license to operate legally and conform to China’s overarching national priorities, thousands of underground Churches also exist across China and for the most part, government officials tend to look the other way.

When, however connections are made between those unlicensed churches and foreign intelligence agencies like the National Endowment for Democracy, Freedom House, or Open Doors (all having vast CIA connections), then they are promptly shut down. Christians, Muslims, Buddhists and Daoists are thus encouraged to find less insurrectionary venues to practice their faith.

Most westerners who criticize China’s non-liberal relationship to its religious institutions tend to overlook the fact that the form of modern warfare relies heavily on infiltration, cultural manipulation, psy ops, and asymmetrical warfare from within target nations. One such organization is the NED-sponsored ChinaAid (based in Washington and Texas) which finances and coordinates networks of underground Churches as weapons for broader cultural warfare across mainland China.

This technique of utilizing religious cells as a cover for undermining China is nothing new, and actually goes back to the Taiping Rebellion organized over 160 years ago.

During this twelve-year bloodbath (1853-1864), a synthetic Christian cult led by a failed school teacher named Hong Xiuquan unleashed a civil war that put the British East India Company on a fast track to crushing China during the second Opium War (1856-1860).

Hailed as a man-god by his devoted followers, Hong Xiuquan was little more than a useful idiot recruited by western intelligence operatives masquerading as protestant missionaries in 1843 and soon became convinced that he was the brother of Jesus himself. With his revelation, Hong became fanatically committed to cleanse China of evil spirits. This evil was not, however the hand of the British Empire that had bled China in the first Opium War (1839-1842) nor the plague of drugs more generally that had destroyed the lives of millions of his brethren. The “evil spirits” which Hong became obsessed with eradicating were rather Confucian and Buddhist thinking in general and the ruling government specifically!

The year of Hong’s great revelation (1842), was the same year that China lost the first opium war giving over Hong Kong to the British Empire along with a vast expansion of drug flows into the impoverished and drug addicted nation. Opium imports skyrocketed to 3200 metric tons per year by 1850 with every province of China soon forced to grow opium to service the ever-growing demand. What was not produced within China was supplied from British controlled operations in India, and the Ottoman Empire.

The Chinese messiah managed to institute a new government called the Taiping Heavenly Kingdom which soon gained control of one third of China’s southern territory making Nanjing its capital by 1851. Its program attracted over 30 million adherents to Hong’s particular brand of Christianity among the impoverished peasants quickly became converts under this synthetic cult. Part of the attraction was found in the Taiping Kingdom’s policy of equal distribution of all property and no private possessions.

Hong’s cousin and partner in crime was an anglophile trained by the British in Hong Kong name Hung Jen-kan. When Jen-kan returned to Taiping headquarters in Nanjing in 1859 he wrote:

“At present England is the mightiest nation of the world, owing to its superior laws. The English are noted for their intellectual power and national strength, are proud by nature and averse to being subordinate.”

Noted historian Michael Billington cited letters which Caleb Cushing’s agent, and protestant missionary in China, W.A.P. Martin had written to his handler amidst the chaos of the rebellion saying: “The Tartars [Qing] dynasty, too far gone in senility to afford any encouraging prospect of reformation, will now, perhaps, consider the expediency of recognizing its youthful rival [the Taiping] which, catching the spirit of the age, may be prevailed upon toe unlock the treasures of the interior and throw open its portals to unrestricted trade… Divide and conquer is the stratagem to be employed in storming the citadels of oriental exclusiveness”.

It is important to hold in mind that Cushing was a leading figure among the Boston Brahmins who made fortunes working with the British in the global opium trade and were always antagonistic to the spirit of the U.S. Constitution itself. Cushing and his fellow Brahmins had been hard at work by this time preparing the groundwork for a parallel Civil War in the USA while the Taiping Heavenly Kingdom were still active in the east.

One of the bargaining chips the British empire used in negotiating the terms of China’s humiliating defeat was the threat to recognize the Taiping Heavenly Kingdom as the legitimate government of China. Beijing was so deeply bled from years of internal civil war that they easily bent to this threat and agreed to every condition demanded by the British resulting in the 1858 Treaty of Tien Tsin and Convention of Peking which granted unlimited access to foreign missionaries (again often covers for foreign intelligence operations), unlimited drug production, and free trade among other abuses that crippled China for years.

By the time the second Opium war ended in 1860, the British saw no more use in maintaining their synthetic cult and like a silk farmer who extracted all the silk from his worms, proceeded to work with the government to burn the cult which was finally exterminated by 1865.

In all, this civil war resulted in 30 million Chinese deaths, and still weighs heavily on China’s mind.

In the wake of the rebellion and broader Opium War, life expectancy sank as 22.6 thousand tons of opium were being produced within China for domestic use by 1900. Poverty ran rampant, and Anglophile freemasonic groups shaped the policy of Triads in Hong Kong where HSBC pioneered global narcotics economics. The crushing of the spirits of the Chinese resulted in the backlash of the anti-Christian Boxer Rebellion that itself became a convenient excuse for western imperial powers to carve up China even further in retribution for damages to houses, rail lines and lives.

By 1910, only one year before Sun Yat-sen’s Lincoln-inspired republican revolution broke China free from the unwinnable Great Game, European and Japanese imperial interests had taken control of vast portions of China’s territory.

Whether we are looking at religious sects masquerading as Christian or Muslim fronts, or Asian scientology-esque Falun Gong cults run by nutty exiled messianic characters like Li Hongzhi who literally believes he is ordained by God to save humanity from interdimensional aliens, Xi Jinping has some messy problems to deal with both within China and abroad. Living in a 400 acre compound in upstate New York and controlling a vast array of cultural/intelligence platforms including Epoch Times, Li Hongzhi’s continuing role as an influence shaper tied to the worst elements of China’s exiled community (including criminal billionaire and Bannon partner Guo Wengui) should lead any rational person to understand why China has taken the position it has on cults like Falun Gong and religious groups more broadly.

In the next installment, we will look more deeply at one more aspect of psy ops in China with a focus on Jesuits, London’s Tavistock and other spiritual poisons threatening the free world.