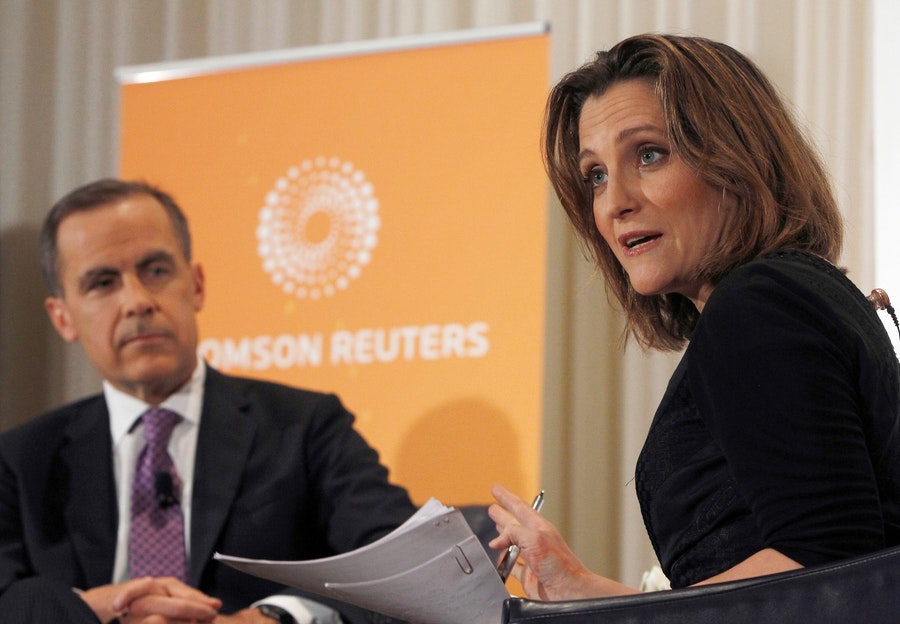 The uncomfortable fact which too many commentators tend to run away from out of fear, ignorance or intellectual dishonesty, is that the world financial system is sitting on the verge of a global financial meltdown of a $1.2 quadrillion derivatives time bomb which former Bank of England Governor Mervyn King stated in September 2019 is on the verge of “financial Armageddon”. This grim reality was known long before the COVID pandemic was launched during October 2019’s Event 201.

It is this oncoming financial meltdown that underlies the war drive against China which certain western geopoliticians fear will shape the new system which they sought to control. France’s Bruno Lemaire laid out this fear in the most candid way in July 2019 when he said “unless we are able to reinvent Bretton Woods, The New Silk Roads might become the new world order”.

So what role does Canada play in this and how does this affect the shakeup in the current Canadian government now moving into a snap election on September 20, 2021? Why would Chrystia Freeland, a Rhodes Scholar more proficient in regime change than banking, be given the reigns of Canada’s economic order during these trying times?

To answer these questions, we must review the role of Mark Carney, UN Special Envoy on Climate Action, former head of the Bank of England, and leading organizer of the upcoming COP26 Summit to be held in the UK this coming November.

When Mark Carney stepped down from the position of Governor of the Bank of Canada in 2013 to become the first non-British governor of the Bank of England since the private central bank was created in 1694, it was made clearly known that this Oxford-trained Canadian technocrat had been vetted by some very high-level powers.

After training for years as a Goldman Sachs investment banker where his activities helped fuel the bubble that nearly brought down the world economy in 2008, Carney was brought into the Governorship of the Bank of Canada to take on the role of the clean, conservative-minded Canadian central banker navigating through the chaos which his former employer helped create. It was at this time that Carney became a member of the Rockefeller Foundation’s Group of 30, Foundation board member of the World Economic Forum and leading participant at Bilderberg and Davos events. While still Bank of Canada governor, Carney was handed the keys to the BIS’s Financial Stability Board (FSB) by fellow Goldman Sachs man Mario Draghi in 2011 where he managed global derivates regulation (aka fuse of the international weapon of mass financial destruction now bursting at the seams).

After serving seven years as Governor of the Bank of England (2013- March 2020) the world economic system has been stretched to its limits and the oncoming collapse has been accelerated by a global pandemic.

After 7 years in the City of London, Carney returned back to Canada to shape the Build Back Better program which essentially laid out a policy for decarbonization in a post-COVID era.

On August 10th of last year, it was first announced that Mark Carney (aka: the eco-warrior of bankers) was running a task force to restart the economy (titled the “Canadian Pandemic Recovery Plan”) which aimed at putting into motion those Green New Deal reforms laid out during the World Economic Forum’s “Great Reset” summit of July 14, 2020.

As I laid out in my recent paper The Great Reset Fraud, this program is little more than a cover for global depopulation and world government run by the same arsonists who have lit the world economy on fire in the first place.

Echoing the Great Green Reset program, Freeland pointed out on August 18, the collapse of jobs, irreversible shutdown of businesses, the unmanageable growth of a $343 billion deficit, and phase-out of Emergency Response Benefits will need to be green and driven by the goal of decarbonization. When asked about decarbonization specifically, Freeland stated “of course, it has to be part of it. I think all Canadians understand that a restart of our economy needs to be green.” She then smiled and stated that this crisis is actually a wonderful opportunity.

For anyone sick of the immoral, monetarist religion of free markets that have run roughshod over the world for the past forty years of post-industrial decay, war and speculation, the proposition to change our “hierarchy of values” may seem like a breath of fresh air. The problem is that the driver of a green economy of green bonds, green grids, carbon taxes, cap and trades, and green banking will tend to cause humanity as a whole to suffer immensely and will strip nation-states of the productive industrial potential needed to resist the will of a transnational oligarchy.

Like all nations, Canada’s economy is extremely reliant on fossil fuels, and every attempt made to create green infrastructure grids has resulted in massive energy price spikes for consumers, unreliable electricity prone to blackouts, and massive tax-payer subsidies to keep green industries financially viable. These problems have required the emergence of green reset task forces using a pandemic to force through changes that would never be democratically accepted under “normal” circumstances.

For the past several years, both Carney and Freeland have been laying the groundwork for a new system of measuring “value” aimed at reducing both national sovereignty and nations’ physical capabilities to sustain human life while simultaneously (and quite ironically) doing grave damage to the environment.

On February 26, 2020, Carney joined Sir David Attenborough in launching the “COP26 Green Private Finance Initiative to ensure that “every professional financial decision to take climate change into account. The right framework for reporting, risk management and returns will embed these considerations and help finance a whole economic transition. To achieve net-zero, every company, bank, insurer and investor will need to adjust their business models for a low carbon world.”

Sir Attenborough has been a lifelong friend of Prince Philip and a neo-Malthusian guru who has attempted to teach the world that all of our woes stem not from systems of empire (to which his career is vitally beholden), but rather to overpopulation. A recent call to leaders to correct this problem using the cover of COVID19 is one of the countless testimonies to this misanthropic philosophy.

The Green banker’s Climate Compact which Carney pioneered would ensure that companies that are considered “dirty” would never receive loans from banks and any insurance they received would come at impossibly high premiums as punishment for their climate offending ways. As a shining role model for “good green behaviour” Carney has cited his former employer Goldman Sachs has already ruled out any future financing for oil drilling, thermal coal projects or Arctic development.

In his paper “Fifty Shades of Green”, Carney stated that all dirty (brown) companies with poor climate grades will either not receive loans or receive loans at such high levels of interest that they will be artificially bankrupted (taxing polluters to death).

As Carney said in September 2019, “the firms that anticipate these developments will be rewarded handsomely. Those that don’t will cease to exist”.

This means that every company working along China’s Belt and Road Initiative in Eurasia, the Middle East and Africa would not exist in Carney’s world while any western company which could actually participate positively in the multipolar dynamic would be cut off of all credit and die.

After companies have proven their greenness, simply being approved for bank loans will not be enough to carry out their business. Here Carney and his colleagues at Canada’s Infrastructure Investment Bank plan to issue green bonds which today amount to only 5% of all global bond issuances but which Carney hopes will soon attain the “$3.5 trillion in energy sector investments [needed] every year for decades” which are required to “keep warming below 1.5 degrees”.

By re-wiring the Canadian economic system to this new system of values in time for the November 2021 COP26 summit in the UK where he will act as British Climate Advisor and key organizer, Carney hopes that the Canadian model will be internationalized so that climate change “will affect the value of virtually every financial asset.”

A New System of Economic Value

The problem with Carney’s post-COVID vision is that “value” is tied not to the rising of living standards, human creative reason or national productive powers of labour that characterized the creative growth of human civilization for the past several centuries but rather upon the TOTAL INVERSE. By placing values on reducing human activity, reducing carbon footprints, reducing traces of human activity upon the earth- the potential to sustain life will not only be consciously reduced but financially incentivized. Under a Green New Deal, humanity will effectively be imposing forms of energy, and practices onto ourselves which will ensure that we never participate in any large scale projects characteristic of the New Silk Road, Polar Silk Road, Asteroid Defense etc… and will never become capable of freeing themselves from a Malthusian class of supranational bankers managing a post-nation state world order from above.

If the world is true as closed, finite and entropic as the misanthropic minds of an Oxford-trained technocrat like Mark Carney, Chrystia Freeland or David Attenborough, then this sort of post-COVID world order would admittedly be the way to go.

If on the other hand, we happen to live in an open system, creative, anti-entropic universe and express a species characteristic of transcending our “limits to growth” by making new discoveries and translating those discoveries into new scientific and technological progress, then not only should Freeland, Carney and other Green New Dealers be removed from all positions of high office, but nations should join the multipolar alliance which puts value on increasing humanity’s potential rather than killing off our species under a 21st-century bloodletting.