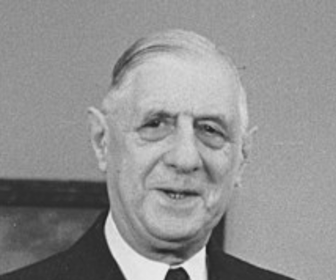 At the official dinner honouring General de Gaulle on the evening of his arrival in Québec, Premier Daniel Johnson was full of hope and outlined his acceptance of the General’s challenge to join in his Great Design.

“Under your leadership, France has recovered a stability that merits our admiration. She has vigorously pursued a vast program of national planning which, in two decades, has justified your unshakable faith in what you yourself have called the ‘genius of rebirth.”

“[…] but your light shines beyond the frontiers of old Europe as witnessed by the eloquent receptions of which you were the object in Asia and in the Americas during recent years. Your understanding of world problems, your decisiveness and your tenacity executing your ideas polarises the hopes of numerous countries. Your diplomatic actions have proven in many ways to be one of the most powerful factors of international equilibrium.”

Two days later, just before de Gaulle’s departure, Johnson added that he believed a new era was opening up for Quebec on the world stage, and that Quebec would be able to play a role of partner and unifying force to achieve universal good will. In the mind of the Premier, the French nation in America would enter world history and realize her international role.

Upon returning to Paris, de Gaulle explained his political vision to the French people, a vision which Anglo American political forces acting through the French press and political channels rabidly attacked. In his televised address of August 10, 1967, the General demonstrated that the liberation of “New France” was a necessary aspect of French foreign policy.

“Ordinarily, each of us- and this is very normal- is absorbed by the circumstances and demands of daily life and thus takes very little time to look at the whole of which they are a part, or what could become of our country. And yet, everything depends upon it […]. As in the tense situation in which the world finds itself, our peoples’ actions weigh heavily on her destiny. We have the opportunity today to ask what goals are necessary for the direction of the country and which path will best achieve them?

[…] Progress, independence and peace, are those goals which our political decisions must follow […] In this way, all that is realized in the development of the country, in whatever domain, at whatever moment, in any way, is fought in principle and without exception, all of the time, by those humble followers of its truth. The fact that France, without denying any friendship to Anglo American nations, but breaking with absurd conformity and outdated habits, takes a proper French position on the subject of the war in Viet Nam and the conflict in the Middle East, or- no later than yesterday- of the unanimous and powerful will to franchise that French Canadians manifested around the President of the French Republic, stupefied and indignant as they were to the apostles of decline.”

For over four decades, a blinding darkness has spread across the Quebec political scene. After the untimely death of Daniel Johnson on September 26, 1968, the nightmarish vision of those “apostles of decline” began to be felt across all of Canada. Over the recent decades, no one has yet risen to shine light on the road to progress, as the light of Johnson’s spirit was no longer directly visible. The English and French populations of Canada had fallen as moths at night, upon the blinding flame of the Empire, embracing either Prime Minister Pierre Elliot Trudeau on one side or his controlled counterweight, René Lévesque on the other. Canadians thought they had to pick either one of the two, without ever considering for one instant that either choice was a trap.

Would it not have been better to return to a saner period of our history and to follow the example of those individuals who understood those goals of Progress, Development, Cooperation and Peace?

Why must we continue to admire those who, consciously or not, brought the vision of de Gaulle and Johnson to ruin? Why must we continuously give our admiration to those who resisted joining their efforts when the time was ripe? Whether you were for or against René Lévesque is not important, but the great error of those living at that time, was their belief that René Lévesque truly desired independence and sovereignty, or even that Lévesque represented, under one form or another, the continuity of the “de Gaulle-Johnson” tradition.

Johnson’s presentation of his project for a constitutional republic to liberate all of Canada, and as de Gaulle hoped, transform the soul of the United States at the same time, was one of the most dangerous moments in the Empire’s recent history.

By the end of the 1960s, the choking of the «French effort» had become a terrible success, culminating with the death of Johnson, the fall of de Gaulle in France the following year, and the October Crisis of 1970. The later October Crisis was an operation directed by the Special services of Anglo American interests, which terrorised hundreds of thousands of Quebecois under the dynamic of terrorism, cultural irrationalism and martial law, to the point that the traumatized population forgot what exactly de Gaulle and Johnson were trying to do for them. Little by little, the consolidation of perfidious independence movements, of which René Lévesque was a key figurehead, became hegemonic and a trap for those in whose hearts a flame of liberty had not yet been extinguished.

Today, the spirit of development, optimism and peace represented by the leadership of Daniel Johnson and De Gaulle is represented in the growing Belt and Road Initiative which is quickly spreading across the world as a collective rejection of the precepts for de-population and one world government outlined in 1946 by Julian Huxley. The western nations long trapped under the cultural, economic and political cage of the Empire need only join this new alliance in order for the spirits of John F Kennedy, Enrico Mattei, Johnson and De Gaulle to come alive in the hearts of citizens once more.