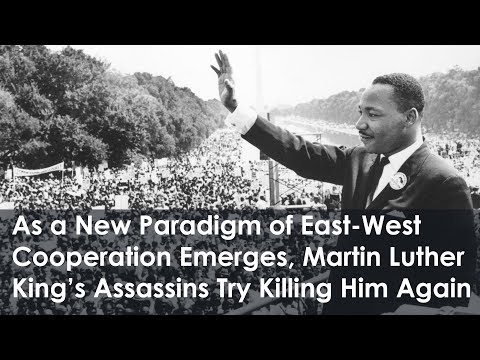 The world marches forward into the new year with a mix of hope and trepidation. The words of Martin Luther King who warned in his final days the universal truth that either we commit to “nonviolent coexistence or violent coannihilation” ring as true today as they did when they were spoken in 1968. In that speech, King stated prophetically that “this may well be mankind’s last chance to choose between chaos and community”.

Had Martin Luther King not been gunned down on the balcony of the Loraine Motel just at the very moment when he was leading a transformation of the civil rights movement into a global movement for economic justice and also resisting the Vietnam War (which today’s Middle East wars are but an extension), the world might have become a very different place.

Unfortunately, a government conspiracy run by the same forces that had already killed Malcolm X and JFK earlier (and soon would also murder Bobby Kennedy) did snuff out the life of King. His spirit, however, has proven to be more resilient than his enemies ever could have dreamed. In spite of decades of effort to destroy the better soul of America that Martin died to defend, the structures of the deep state which overtook America after 1968 stand increasingly weak, insecure and exposed as ever… but not less dangerous, as witnessed by the current efforts to impose a new regime change in Iran and nuclear war with both Russia and China.

With this danger of violent coannihilation in our minds, it is worth revisiting the passionate words of MLK who ended his last speech “From the Mountaintop” on April 3, 1968 (the day before his death) with the words: “Like anybody, I would like to live a long life. Longevity has its place. But I’m not concerned about that now. I just want to do God’s will. And He’s allowed me to go up to the mountain. And I’ve looked over. And I’ve seen the Promised Land. I may not get there with you. But I want you to know tonight, that we, as a people, will get to the promised land!”

King’s murderers did not realize in 1968 that a future world could ever come into being that would usher in a paradigm of economic justice, cooperation and harmony which today’s New Silk Road Eurasian Alliance is accomplishing. Out of fear of the re-awakening something asleep in the collective American psyche, a vast slander campaign has been undertaken by David Garrow (Obama’s “official” biographer) to attempt to run King’s memory through the mud of slander.

The following video was produced by my wife and I in honor of King and in the hopes of shedding light onto the parasitic lies that have managed hacks like Garrow and dragged King’s legacy through the mud for far too long.